Are there foods that speed up the metabolism, break down fat, increase calorie expenditure, and help you lose weight?

All foods contain calories, and if a person has too many, they go to fat.

The body can only be in two states:

Anabolic. We eat, the food goes into the stomach, then into the small intestine. From there, the substances go into the bloodstream and the body starts to use them or sends them into supply. This is when the hormone insulin is active. At this point, all fat burning stops, even if the person is on a diet.

Catabolism. When the body has finished digesting and assimilating food (3-5 hours), it begins to use its stores for energy. Just at this time, the body is in “fat burning” mode.

This is a fundamental principle of fat deposition and weight loss. If the total energy intake for the day is more than the body expends, the person gets fat. If the opposite is true, the person loses weight.

As soon as food enters the body, the anabolic phase begins:

Every food has calories – some more, others less. This means that any food can be stored as fat.

However, the internet is full of lists of special fat-burning foods that affect your metabolism, thermogenesis, calorie expenditure and make you “eat and lose weight.”

Scientists have proven that it is medium-chain fats that speed up the metabolic process by a factor of three, which is integral in the fight against extra pounds. In addition to the fact that with the help of coconut oil you can bring your weight back to normal, it also has many other beneficial properties for the body. The easiest way to lose weight with it is to take 1 tablespoon in the morning instead of breakfast.

Let’s omit that replacing a hearty breakfast with a spoonful of whatever will help one lose weight, simply because one will eat less. 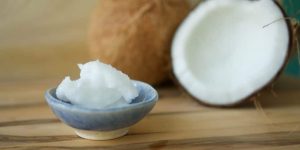 Coconut oil will not help with an excess of calories during the day – excess fat will still be deposited. This means that the calorie deficit still comes first.

Coconut oil can temporarily increase your metabolism. True, the effect is only noticeable at first and disappears after two weeks. In another study, groups of women with abdominal obesity (on the stomach) were given 30 ml of coconut oil or 30 ml of soybean oil for 12 weeks. A calorie-deficient but carbohydrate-rich diet. Although both groups lost about the same weight, the “coconut” group lost an average of 1.4 cm more in the waist. For an overweight person, this is a drop in the ocean.

Another study showed similar results – weight was lost in both groups, but the waistline was slightly smaller in the “coconut” group.

Another study: the group that received pure MST fats lost 1 kg more than the control group in three months.

So coconut oil, although it works, but the effects are too insignificant and, they are only found in overweight people.

These berries are a natural antioxidant that prevents the formation of harmful free radicals and alleviates the stress experienced by the body when losing weight. Unsaturated fatty acids help speed up and normalize metabolism, which is important for people who gain weight quickly. Also, Australian newspapers in 2004 wrote about the anti-cellulite properties of goji berries.
As for antioxidants, the “more is better” rule does not work here. Excess antioxidants are harmful. And the usefulness of antioxidants in neutralizing free radicals is not as obvious as journalists write about it.

The ORAC (oxygen radical absorption capacity) scale was used to assess the antioxidant effectiveness of plants. But in 2012, the project was halted because it could not be linked to any real health benefit. 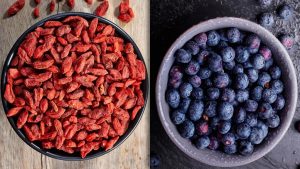 To date, there are no independent studies published in peer-reviewed scientific journals proving that açai promotes rapid weight loss.

The story is similar with goji berries. There is no credible evidence of their benefits. Most studies are small, of poor quality, have been done on rats and use purified, highly concentrated extracts, which is intolerable in real life.

eating as many different berries as possible is in any case a good idea, but it is not worth spending money on an exotic product with unproven effectiveness. As for weight loss, although it is much harder to overeat berries than cakes, they still contain calories. Which means that the calorie deficit comes first again.